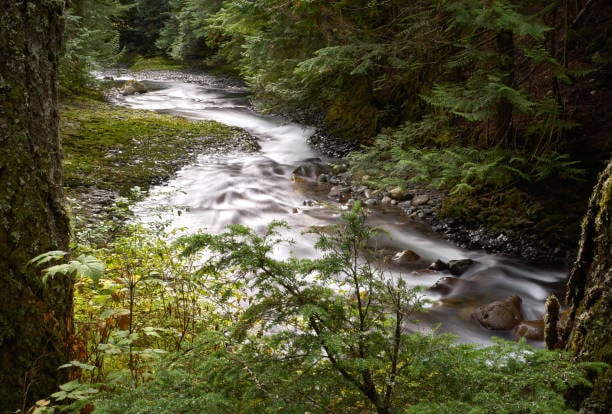 Originally part of the du Pont family estate of Winterthur – pronounced “winter-tour”– it was purchased by the state of Delaware in 1965. The du Ponts used part of the property as a dairy farm from 1893 onwards; even now, the bucolic pastures of the park call to mind a herd of roaming cattle. In the mid 19th-century, the family also hired Italian masons to build blue gneiss stone walls around the land, many of which are still standing.

An additional 500 acres was donated to the park in 1981 by William Poole Bancroft’s Woodland Trustees. Bancroft, an American industrialist, was dedicated to Delaware’s land conservation movement; he established the Woodland Trustees in order to continue the work of preserving the Brandywine Valley’s pristine natural beauty after his death.

This state park is a pastoral slice of Delaware’s Piedmont region, known for its ancient foothills. The stone walls for which the park is known are made from the dominant rocks of the Piedmont region. This area is also known for its large range of flora and fauna, especially when compared to nearby Coastal Plains regions. Some of the Brandywine Creek State Park is made up of an old-growth forest, with trees such as oaks, tulip poplars, beech trees, sycamores, and much more.

Out of the park’s four nature preserves, two – the Tulip Tree Woods and the Freshwater March – were the very first nature preserves in the state. The Tulip Tree Woods is home to a stately population of 190-year old tulip poplars, while the Freshwater Marsh is host to a diverse range of plants and animals. The park’s other preserves are the Carney Tract, named after Delaware governor John Carney, and the Flint Woods, the old-growth forest that is home to many rare songbirds.

In addition to its abundant environment, Brandywine Creek State Park is also known for its trails and creeks. There are over 14 miles of trails throughout the park that are perfect for walking, jogging, biking, and observing wildlife. The East Coast Greenway Trail runs through the park – over 3,000 miles long, it stretches from Maine to Florida. Other notable trails are the Rocky Run Trail, the longest in the park itself, and the Brandywine Trail, which weaves along the river. Many also flock to the river to fish its large bass population; trout is also abundant in Wilsons Run, a waterway within the park.

This state park is also host to the Brandywine Creek Nature Center, an environmental education organization that provides visitors with natural history programs, guided tours of the park, birding programs, and more.

Whether you are a nature buff or you are just looking for a fun day outdoors, Brandywine Creek State Park is the place to be. Fish for bluegill in Brandywine Creek, throw a frisbee in one of the many fields, look for rare birds, or stroll along a 19th-century wall during a visit to this park. The park is open every day from 8:00am to sunset, at a cost of $4 for in-state visitors and $8 for out-of-state visitors.